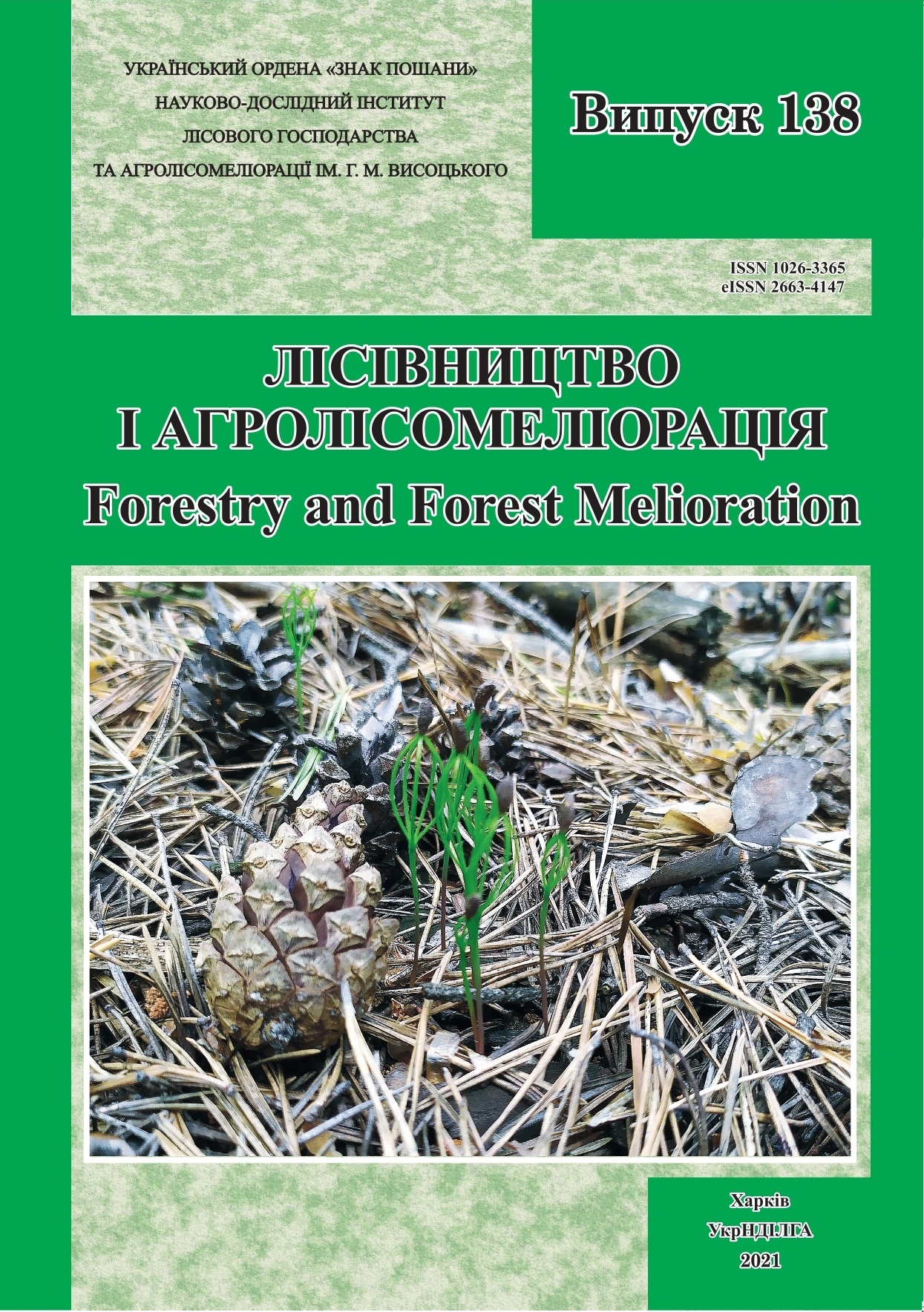 Dieback of Norway maple (Acer platanoides L.) attracted much attention in different periods; however, this phenomenon has never been important in forestry as it did not significantly change the structure of stands with this species. Maple verticillium wilt, spread of stem rot, defoliation by insects, etc. are the main pathological processes and they are brought about by ecological changes of natural and anthropogenic origin.

The object of the research were the forest stands where there was a large-scale dieback of maple for the period 1994–2018. The survey of maple trees with signs of decline was carried out in the spring of 2016 in forest stands of 6th–7th growth classes in Kharkiv Region. Pathological processes were determined by characteristic features. In the stand where defoliation of the crowns reached 70–90 % in the experimental site and 30–40% in the control, soil pits were dug. Soil samples were taken in each soil layer every 10 cm to a depth of 1.5 m. Then, relative moisture and hardness of the soil were determined by means of Golubev hardness tester. Climatic features for the period of 2012–2016 were investigated using the data of Kharkiv weather stations.

The scale of maple stand decline has been gradually increasing in the southern and eastern regions since 2009. The main reasons for the maple dieback are diseases which have intensified since 2009 and as of 2018 reached their maximum. A survey of dying trees in Kharkiv Region in 2016 showed that the upper part of most branches with a diameter less than 0.5 cm was completely dead. The depth of soil moistening was higher in the soil of the stand with less defoliation, as evidenced by the depth of carbonates. In December 2015, positive temperatures prevailed. The decrease in temperature began on 28 December. January turned out to be the coldest month for the last 5 years (-7.2°C). The average temperature in February was +1°С. A long period of warming, namely 26 days, was observed from 22 February to 18 March, which cause tree sap circulation. However, on 19–21 March 2016 the temperatur dropped to -4°С, which caused icing of buds and shoots. During August, September and October of 2015, only 22 mm of precipitation fell, and in November 2015, the highest amount of precipitation fell for the last 15 years (92 mm). During the drought, the trees lost part of their leaves, and in November, due to high humidity and positive temperatures, the growth of shoots was restored, which in late December, during a long period of lower temperatures, froze and lost viability.

Development of pathological processes in the Norway maple stands for the period 1994–2018 was caused by climate change. Therefore, starting from 2009, the scale of diseases started growing, and as of 2018 it reached a maximum. The main reason for the maple decline in Kharkiv region is the coincidence of non-typical climatic fluctuations between the end of 2015 and the beginning of 2016. This period was characterized by a drought in August–October 2015 (precipitation: 22 mm) and exceeding the average long-term temperature and precipitation, 3 and 2 times, respectively, in November. A prolonged drop in temperature in late December caused icing of shoots. Moreover, the warming in the third decade of February 2016 was interrupted by decrease in temperature
to -4°C. Then, the buds and shoots in which the sap flow had begun became frosted. Most maples in the stands on heavily loamy soils lost up to 30–60% of the crowns. Most maples in the stands on heavy clay loamy chernozems lost up to 30–60% of the crowns. On soils with a lighter texture, the volume of defoliation was significantly lower.