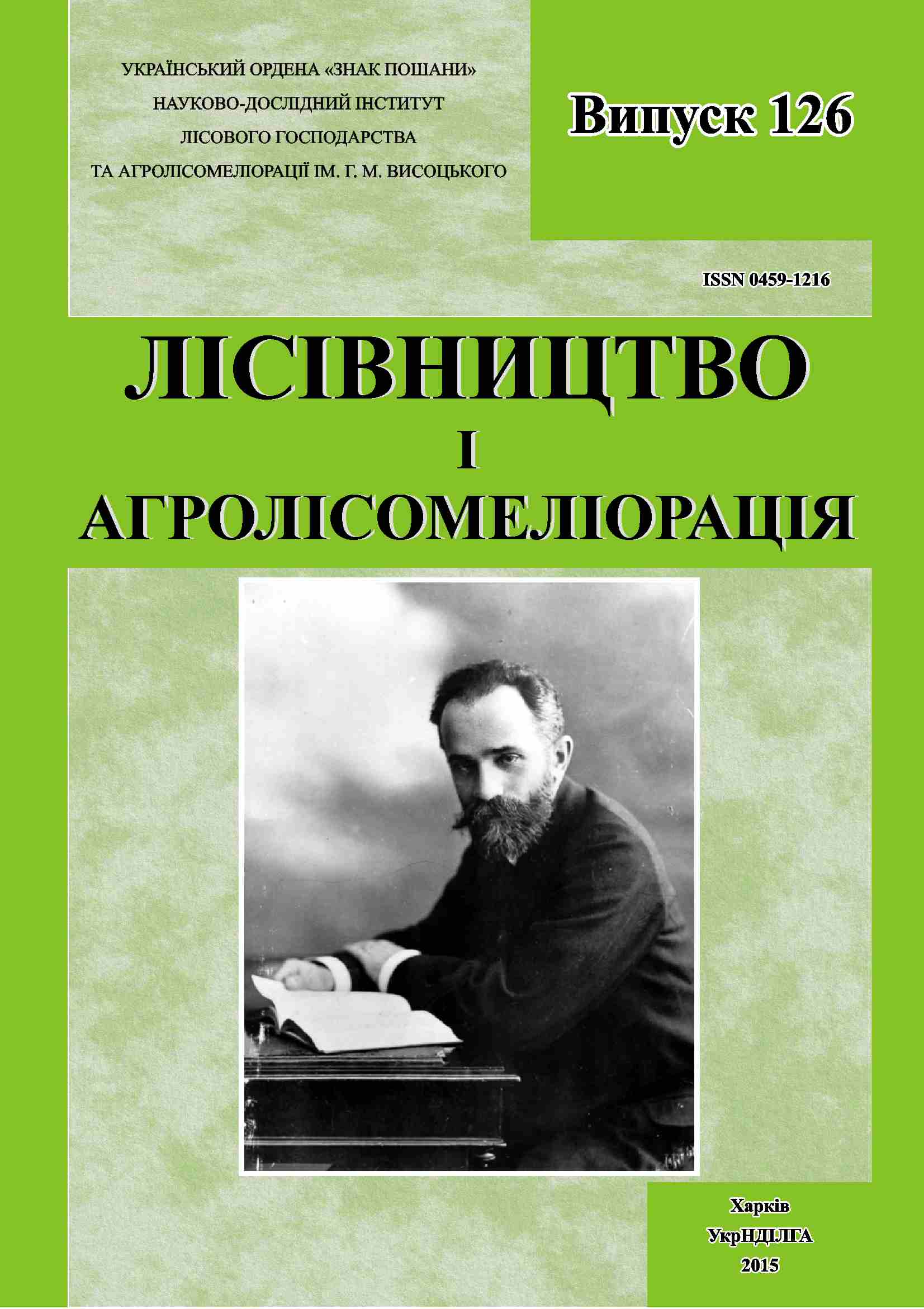 The actions on forests quality improvement and the resilience and productivity restoration include conversion and forest hygienic felling. According to the “Regulations on the improvement of qualitative composition of forests” (2007), conversion and forest hygienic felling includes combined felling along with traditional types of felling. The complex felling combines elements of principal felling and cleaning cutting. The combined felling is subdivided into regeneration felling and conversion felling.

The aim of the research is the implementation of experimental conversion felling for the determination of optimal parameters of organizational and technical elements of cutting in the pine stands of East Polissya.

For the gradual transformation of even-aged uniform-species forests into uneven-aged mixed composition the following variants were tested:

2) The formation of rectangular gaps with the short direction of about 1.0 of height, and the long one of 1.5 of average height of the stand (the lengths ratio is 1 : 1,5);

4) The formation of round-shaped gaps with a diameter ranged from 1.0 to 1.5 of average height of the stand;

5) The formation of round-shaped gaps with a diameter ranged from 1.0 to 1.5 of average height of the stand and uniform thinning out in regeneration strip that is neighboring to the gap;

6) Uniform thinning out of the stand.

Permanent plots were laid by standard methods to determine the intensity of felling and the tree mortality after the cuttings. The sanitary condition category of the trees was determined by the “Sanitary rules in forests of Ukraine” (1995).

The results and conclusions.

Tree removal by narrow strips of 1.0–1.5 of the stand height as well as by ringed spaces of 1.5 of the stand height, with a thinning out of stand in neighboring regeneration strip, showed the highest values of dead wood in left parts of the forest. Therefore, the most appropriate is the creation of rounded gaps with a cross-section size of 1.0 of average stand height. After first conversion felling, resistance of a pine forest is provided in the plots with the rectangular or square gaps with a diameter from 1.0 to 1.5 of average stand height (an area is not more than 600 m2). The number of regeneration gaps should be no more than 5 per 1 ha. In even-aged pine stands, the gradual method of conversion felling is applied.

The removal of trees in winter just before the Scots pine seeds falling, at cone crop of 3 points or higher, ensures satisfactory pine regeneration. For this reason, either autumn or winter season should be chosen for conversion felling.

After the conversion felling during the growing season (after seeds falling) it is necessary to implement measures to promote pine regeneration (loosening the soil, sowing seeds, planting seedlings of trees of principal species). Every next conversion felling is assigned after canopy closing of young stands of principal tree species in previously felled areas, with simultaneous tending felling in the young generation.