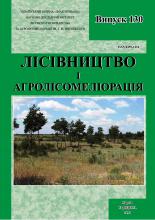 This pest reveals physiological injuriousness because can colonize also living trees at high population density, to weaken them during maturation feeding and to transfer the pathogens, particularly pine wood nematode Bursaphelenchus xylophilus. Because of it some countries have restricted timber import from the countries, where Monochamus sp. is spread.

Pine sawyer beetle is also technical pest because its larvae gnaw wide and deep galleries in the wood, which brings losses to its quality.

The aim of the research was to estimate the dates of pine sawyer beetle development, duration of different stages and respective temperature conditions in the North-Eastern Steppe of Ukraine.

The research was carried out in 2012–2016 in the stands of Scots pine (Pinus sylvestris L.) in the six forest enterprises and forest & hunting enterprises in Kharkiv and Luhansk regions.

Peculiarities of pine sawyer beetle seasonal development were studied both by direct registration the beetles during leaving at colonized trees, pairing and colonizing new trees or their segments, and inspection of colonized stems and branches by dissection in different dates.

The date of the first appearance of a certain stage was considered as the earliest date from all findings in the region.

Data on daily air temperature were taken from Luhansk (2012–2013) and Izyum (2014–2016). The dates of stable temperature transition over 5, 10 і 15°С, as well as the sums of positive temperatures, have been calculated. Descriptive statistics and variation index were calculated using MS Excel.

Early, medium and late dates for renewal of larvae feeding after wintering, their pupation, adult emergency, egg-laying, and larvae hatching were determined. Significant correlation was proved between the dates of larval feeding renewal and their pupation, as well as between the dates of stable transition of air temperature over 10°C and adult swarming beginning. All these phenomena have a tendency to shift to an earlier date. The necessity of pine wood debarking after summer felling and its exportation from forest no later than 10 days after felling is substantiated, taking into account the minimum duration of pine sawyer beetle eggs development.