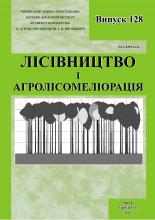 A brown hare (Lepus europaeus Pallas) is a traditional and the most huntable species in Ukraine and the Lviv region in particular. Hares remain one of the few game species available for most hunters. The vast majority of the hunting entities exist mainly because of the resources of this species.

Accounting of the hare has been conducted by the running method, by two-time mapping of the tracks in the test areas and by routing method. Accounting covered both field and forest areas. 70 % of the total area covered by accounting are field lands and 30 % are forest areas. Besides, workers of hunting entities and hunters have been interviewed, and reports of the Lviv Regional Department of Forestry and Hunting have been analyzed.

The total area of hunting lands of the Lviv region is 1 billion 771 thousand ha, including 1 million 073 thousand ha of fields; forest areas are 653 thousand ha; wetlands, 45 thousand ha. For almost a quarter century (the period of Ukraine’s independence), a high abundance of hares in the Lviv region was recorded in the first half of the 1990s. Its highest level was reached in 1994, over 90 thousand animal units. A sharp decline of hare number occurred in 1996–1997 when the number of animals has become down by half. After 2001, the trend towards a slight increase in the number of the animals has been observed. In 2007, its abundance was already about 60 thousand species and remained approximately at the same level with a slight increase up to 2009. The following sharp decline in the number of hares occurred in 2010. The number of species remains low until now.

Studies of the hare population on 7 areas of hunting grounds in 3 natural regions of Lviv region (Subcarpathia, Roztocze, and Opillia) showed that the density of hare population is lower than the one reflected in the official records of the users of hunting grounds. It is worth noting that on none of the studied accounting areas the hare density has reached its minimum level, when it is allowed to hunt animals, 20 species per 1 thousand ha of lands.

During the period of Ukraine’s independence, the number of brown hare in the Lviv region reached its highest level in the first half of the 1990s. A sharp decline in the abundance occurred in 1996–1997. It has been established that the amplitude of waves of hare population reaches much greater values than it is reflected in the reports of the users of hunting grounds, and the percentage of extraction exceeds the limit. Hare resources are currently low. The average density of this species in the studied areas of the hunting grounds before the breeding season in 2016 constituted 15.3 species per 1 thousand ha. In many field areas, the abundance of hares before the hunting season does not even reach the minimum level when hunting on animals is allowed.

Given the current low abundance of hares, the main efforts of the users of hunting grounds and hunting control services should be focused on increasing the number of these species.