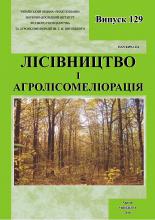 In order to improve the efficiency of cutting propagation and increase the percentage of rooting, various preparations had widely used and still are used, among which are quite effective humic and amino acid ones. The new poly-nutrient amino-acid humate fertilizer “Rokohumin” produced by Rokosan (Slovenia), which contains 13 % of humic acid, 4 % of total nitrogen (N), 9 % of total phosphorus (P2O5), 14 % of total potassium (K2O) and about 30 % of different amino acids, which should be an effective means for intensifying the cutting propagation. In addition, “Rokohumin” contains magnesium, calcium, sulfur, boron, zinc, copper and manganese in chelated form, that is, in the organo-mineral complex.

Experiments on the impact of fertilizer on the rooting efficiency of cuttings were placed in an open greenhouse with a system of vapor irrigation. Cuttings of trees and shrubs were planted in boxes with dimensions of 2.4 ? 1.2 ? 0.2 m, which were filled with fertile soil.

The difference between the maximum and minimum rooting values in the variants of the experiments with Juniperus chinensis 'Stricta' was 60 % on the control, 57.1 % in the case of a single application of the fertilizer and 50 % in the double dressing. In the experiments with Thuja occidentalis Golden Smaragd, these indices were 44.4 %, 24.5 %, and 52.2 %, respectively. This is due to a number of abiotic and biotic factors and uneven rooting conditions that relate to the technological process itself, the ideal performance of which is virtually impossible in an open ground. The percentage of rooted cuttings in our case is somewhat higher in comparison with the data obtained in open ground by other researchers. In particular, the rooting of the Thuja occidentalis Golden Smaragd in the nursery of Trostyanets Forestry was 70.0 % in the control and 75.0 % in the case of one-time fertilization, while, according to the literary data of scientists of the National Botanic Garden named after M. M. Grishko of the National Academy of Sciences of Ukraine, the rooting of the Thuja occidentalis was 36.7 % in the first year. For the Juniperus horizontalis Moench., the percentage of rooted cuttings was 33.3 % in the control, 40.0% at the one-time and double spraying with fertilizers – in the forestry, and 30.0 % according to the research results in the National Botanic Garden.

It should be noted that the use of “Rokohumin” by leaf feeding method helps overall improving condition index, reduces the percentage of dry cuttings and increases the percentage of healthy cuttings in variants within the experiment. The proportion of rooted cuttings increases by 3–16 %. For first year cuttings, an ascending series according to rooting ability was identified by controls: horizontal juniper – 33.3 %; common juniper (f. columnar) – 57.9 %; Chinese juniper – 60.8 %; Western arborvitae (f. Smaragd) – 70.0 % and rock juniper – 85.7 %.

The success of cutting propagation depends on a number of biotic and abiotic factors, each of which can significantly affect the process and the result of rooting. The ability of coniferous ornamental plants to cutting is resulting from physiological, species and shape characteristics, the age of the mother plant, part of the crown where the cuttings were picked up, the time of cuttings collecting, substrate for rooting, light and water regimes, the method of rooting stimulation, etc.